Cascais to the Canary Islands 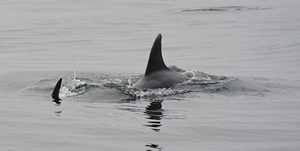 We took off from Cascais at 10 am in lovely weather. Unfortunately no wind at all why the engine, again, had to do the work. The water looked like oil. It was expected but we hoped for wind later in the afternoon. The good thing was that we could easily spot animals which we also did. Small sharks were swimming close to the surface at several occasions. The nice surprise was a bunch of small pilot whales that came very close to Peach. Actually they crossed our path and dived under our yacht. We got a good look and took some pictures. No dolphins today so far though.

Still at 15.30 pm no real wind even if the “oil” has disappeared. We have left the shelf behind us and the depht has reached 1500 m and we will soon cross the north and southbound ship lane. Will probably go close to a couple of merchant ships. At least it looks that way on the AIS.

Night is approaching and still no wind but instead fog which is with us the whole night. Nothing in particular to tell other than it was pitch black. We hoped for the sun in the morning but no such luck, still the fog. Really nice to be able to see through the fog with our radar as well as see all AIS markers on our plotter. We did not expect small crafts without AIS this far out.Day 2In order to save fuel we did not press our engine and so far, 10.00 am, we had made 140 nm. We have not enough diesel for the whole journey to Las Palmas why wind is essential. We needed to set up our third crew member, the Hydrovane, as soon as possible. But, the weather refused to change, more fog and we started to feel hopeless. The temperature was ok of course this far south but where is the sun! It took until 10.00 pm before we detected a slight wind of 8-10 kn. We celebrated with a piece of chocolate. Finally it was possible to get under way by sail. It was direct tailwind why we just set part of the genoa with a whisker pole. Tricky to use a full genoa for the forward lower shroud. Anyway everything worked and we made 4-5 kn the night through.Day 3At 10.00 am the trip log displayed 250 nm which made us feel ok. We always calculate with 5 nm/ hour when doing long journeys and everything more than that is just bonus. It might be appropriate to mention the weight of Peach which is around 13 tonnes. Fully loaded as you may have expected. As we have been used to, the day started with, well not fog, but a grey sky why the sun still was missing. The Hydrovane did its work perfectly and the wind had slightly increased although we wanted more. 20 kn would be perfect, comfortable and a little faster.

When suddenly the sun turned up, and then disappeared early afternoon, we noticed that the colour of the water was violet which was fascinating. I looked for a Portuguese Man of War ( see picture) to show Karin but nothing. In fact, no animals except some birds, and no ships were to be seen other than the AIS markers on the plotter. The depht under our keel has reached 4000 m. Early evening it is time to start the engine for hot water and at the same time produce 200 L of water. The Vane needs to be calibrated due to the increased wind and a look at the whisker pole is on the agenda as well. All is good and what is left is to meet the night and to prepare a nice dinner which Karin takes care of. The night pass without problems and day 4 is emerging.Day 4Starts at 10 am as you know now. A little more wind, 26 kn, and powerful waves from behind. We reduce the sail area a little bit and prepare to download a grib file. The weather conditions seems to have changed. Sure, that is exactly what the file show us and even more, the weather further south seem to have gotten much worse than expected. We need to think! Is it wise to continue south and face a wind speed up to 35-40 kn? Or should we alter course? Madeira is at 270 degrees and in that direction we might be able to go around the coming low pressure area which seems to have hit the Canary Islands. It would only take around 48 hours to reach Madeira. We decided to set course for Madeira at lunch time.  The wind increased even more and during the night we had a lot of wind, 30 kn from behind. At four in the morning the wind disappeared. Funny how unpredictable it can be far out. The engine had to kick in again. We were in the area north of the strong winds further south. No surprises during the day. Weak wind, some help by the engine and the weather is nice. Night is approaching and the wind increase of course. Never a quit night.Day 5Weak wind most of the day although nice weather and all is great. In the afternoon early evening we suddenly get 30 kn from behind and the night is, as you already know by now, never quit. It is a strange feeling hearing the waves (2.5 m) approaching Peach from behind and feel when she just move out of reach at the last moment. Anyway, at 2 am it gets better and we can see the lights from Madeira. When we get close, approx. 15 nm from our destination, the wind suddenly increase again due to the effect from being close to the islands. After arrival we actually consider waiting until daybreak before we enter the marina which is Quinta Du Lorde. When get even closer to the mountain, a stone throw, we got some shelter and we consider it safe to berth. The time is 05.10 am. Straight to bed.Day 6 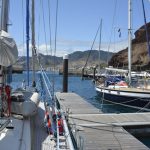 Madeira, in the middle of the ocean, mighty mountains, beautiful environment, clean and quit. No wonder the island attract tourists. Commercials flights are arriving and leaving constantly. We would have loved to stay for more days than we did, walk the mountains, do some diving in crystal clear water and drink the famous Madeira wine.

Unfortunately we had to leave the day after our arrival for the Canary Islands where we had business to attend to. Moreover on Thursday (we left on Sunday) a massive area with very strong winds was supposed to arrive all over the ocean where we were. We are a little tired of strong winds.

We left at 09.30 am on Sunday and set a direct course for the Canaries. The marina we left behind was beautiful, connected to a nice resort and the people were very friendly. A shame to leave.

Good sailing throughout the day at 20 kn but in the evening the vind disappeared and the engine had to work again. The night was calm and was it not for the engine noise it would have been perfect. We were visited by our first “flying fish” and hurray, the dolphins were back. By the way, a small squid landed on the deck and we will always be reminded due to the black ink it left on the deck impossible to get rid of.Day 7Still no wind. Ilhals Selvgens, the Portuguese islands more than halfway to the Canaries can be spotted in the horizon. We are alone at sea, no ships or small crafts except us are out there. Nothing worth telling happens during the day. We pass the islands at 8 pm with 100 nm still to go before we reach Las Palmas.Day 8At 10 am we can see Gran Canaria. At 3 pm we enter the Las Palmas port and go directly to the visitor’s pier in the marina. We have finally arrived.

Now the real challenge begin. To get a berth in the marina despite the upcoming Atlantic Rally Cruise (ARC) with all the boats taking up every single space. Well, we got a berth for a couple of days and we’ll see what happens next.