Through the Panama Canal and beyond

Finally the time had come to take on the Panama Canal. Three line-handlers came onboard bringing 4 lines each 40 m long and a couple of big fenders. The fourth line-handler was Karin, first mate on Peach. We left Shelter Bay Marina at lunchtime and 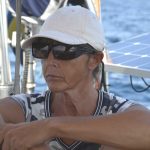 picked up two canal pilots on our way to the first lock which was part of the Gatun locks. In total we were 7 persons onboard to handle the canal transfer. Just before the first lock, one of three, was a giant crocodile resting on the shore. The biggest one so far. Anyway, we had been told that the plan was to get attached to a tugboat during the three locks which seemed to be simple enough. Unfortunately the currents in the locks were strong why it took some effort to get close to the tug and tie the lines without damaging Peach. This procedure were repeated twice before we had cleared all three locks and was able to enter the Gatun Lake which is huge. The lake is the fresh water reservoir for Panama City. Actually the drinking water (tap water) in Panama was surprisingly fresh.

We left the last of the Gatun locks at 5 pm why we needed to stay in the Gatun Lake during the night. We tied us to a big buoy which had been anchored in a nice place where also the pilots left us. It was now time for dinner and a lot of food was prepared to feed the young line-handlers. We had been told that the chance to see crocodiles swimming around Peach early in the morning was great. Unfortunately no croc showed up. At around 8 am the new pilot arrived and soon after that we were on our way again. It took close to 6 hours to reach the Miraflores locks on the south side at a speed of 6 knots. On the lake we saw one of National Geographic’s research vessels anchored just outside a well known bird watching station linked to the Smithsonian institute in Panama. That reminded us of where we actually had brought Peach. 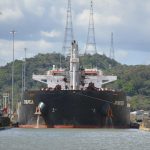 The transfer through the remaining three locks were smooth. Instead of being tied up to a tug we were placed in the center of the lock(s) via four lines. This was easy despite strong currents.

Finally the line- handlers had to do some work! It was a nice feeling to leave the locks and continue to the Balboa yacht club where we took a buoy and said goodbye to the pilot and the line-handlers who also brought with them the 4 lines and the extra fenders we had hired.

We stayed one night at the buoy at a price of 40 US which was a too high price according to our opinion. Sure, it was special to be very close to the big ships passing us to and from the canal but it was also very bumpy… The day after we moved further out to the bay La Playita at Isla Flamenco. This is also the place where we check out from Panama later. The anchorage was nice and not to many boats. We stayed a couple of days just to get the feeling of suddenly being in the Pacific Ocean. Our plan was to visit Las Perlas for a week or so and then set course for Vista Mar Marina, 40 nm south of Panama City. 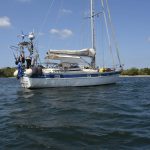 pearl diving 4-500 years ago until the Spanish came… Well, still people can get pearls and we were offered to buy from locals but chose not to. We sailed around the islands, anchored in remote areas where Peach was the only sailing yacht to see, especially in the southern part. Up north there were more boats. The most northern island, Isla Pacheca, had a large number of Frigate birds lovely to watch when gliding above us. All islands had many beautiful beaches. Unfortunately the cold, north- going Humboldt Current had brought in cold water of around 20 C and very poor visibility as well. Locals said that blue water will come later in April. Anyway and at last we spotted Humpback whales east of Isla Del Rey, twice actually. Fantastic! The area is well known for their feeding ground as well as for a place where they are bringing up their young ones. While anchored south of Del Rey we also scraped the hull of Peach wearing a 7 mm wet suit for protection against the cold water. We have heard stories that barnacles grow very fast and get big in the Pacific water. The hull was pretty ok due to that all of the antifouling had not yet disappeared.

After the Pearl Islands we set course for Isla Otoque and Isla Bona halfway to Vista Mar. We anchored off both islands and our favorite was Isla Bona, a small bay with calm water. When we left we had very strong wind accelerated by the larger island, Isla Otoque. Vista Mar Marina was 25 nm from where we were and it took half a day to get there.

Currently we are in the marina fixing a lot of things before we take on the Pacific. The marina is newly built and the price is fair although it is really windy this time of the year and the strong wind in conjunction with a tide of 4-5 meters makes the mooring very, very bumpy. The water is for free in the marina but we pays extra for electricity. With the help from the marina we have managed to get propane. All shopping has to be done in Panama City or in the closest village from here; Contadora, so it is important to plan ahead and to be effective. We have already made several trips to both places for ordinary supplies as well as for special items. So far we have repaired our toilet, our boom canvas for the mail sail and the bimini. We have bought all dry food we believe we need (Two hours at Rey,  Super 99 and eight hours of storage!) Extra water and other beverages are also in place. The refrigerator and the small freezer are now defrosted. We have also preserved a lot of food.

Important matters pending are e.g. fill up the fuel tank, put the dinghy on deck, hook up the rudder to the Hydrovane, buy fresh food, do the laundry, fill water in jerricans as well as top up the water tank, pay all bills and make final preparations in regards to  weather/wind and navigation.

Anyway, Vista Mar Marina is the place we start from in February and we plan to sail straight to the Marquesas Islands although one can never tell if we make a short stop at Galapagos which would be necessary if we need more fuel. The trip between here and Galapagos might be without any significant wind if we are unlucky. We estimate the journey to the Marquesas to take approx. 40 days if we manage an average speed of five knots. We look forward to the crossing and the destination.