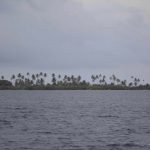 It took two days from Cartagena to San Blas, Panama. We had wind for 24 hours then the iron horse had to do its work. More or less for the first time on our journey we were without wind for more than six hours. Suddenly at 5 kn with the help of our engine, the intermediate shroud attachment on the mast on starboard side went off. We secured the mast with an extra backstay on the starboard middle cleat just to be safe. Going by engine did not pose any significant risk but, well, just to be safe. We arrived in San Blas at first light and were welcomed by three turtles. Well anchored we replaced the shroud with a spare. According to a rigging expert we have talked to, and after he had looked at the faulty shroud attachment, he said it was clearly a material error. We’ll see.

We had set course for San Blas, Isla Porvenir when we had been told that clearance and cruising permit could be done there. Wrong, we got a stamp in our passport which is most important when there are often passport-checks by the Police. The immigration officer on the island recommended that we get a cruising permit at Puerto Linton, 37 nm away. We had 5 days to do this he said although the legislation seems to talk about 72 hours. Anyway, we started our engine (no wind) and set course for Puerto Linton. Stopped for the night and anchored in a very nice place, Turtle Bay, where we were visited by a family of small whales called “false orcha”. Very nice indeed but no turtles.

Day two we anchored in the bay outside Puerto Linton and planned to get the cruising permit the day after. Well, not possible we were told by someone, we have to take the bus to Portobelo why we started to plan for that. Before we went, we met a Swedish sailor with his yacht TAO with which we spent (and spend) time with who said that it is no problem to get the permit at Linton marina located in the same bay. Correct, we went there and finally got our permit for one year, $185 US and it took 10 minutes. Perfect, all is set, we have all the necessary papers and are free to cruise in Panama waters for one year if we wish. 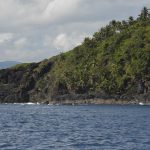 Currently we are at anchor in Puerto Linton which is well protected from all absent winds…except from westerly winds, well away from the hurricane tracks but not from all monkeys in the nearby jungle who are very noisy from time to time. Seems to us that they scream the most when they try to agree on who sleeps where. Suppose it is a matter of getting the best tree branch. From time to time there are thunder storms, lightning and heavy rain, it is indeed the rain season here. So far we have not had heavy winds, the pilot talks about as much as 45 to 60 knots from SE only for approx. half an hour or so. Regardless, we can do without such winds. There are many other boats anchored here but only crews on half of them, people seems to have left their yachts at anchor while they probably have gone back home for a while.