Back to Grenada awaiting further sailing 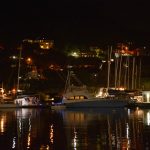 After maintenance, repair and just a wish to see Trinidad we are back in Grenada. Focus was whether Sweden will advance in the WC soccer game. Well, they reached the quarter final but lost to England. The Swedish team was not to be recognized and England did a better job.

The trip to Grenada was easy even if the risk for piracy was there. No such thing happened and we arrived safely to the anchor place in Martins Bay just outside ST Georges. Anchoring may be somewhat difficult in the Bay due to a rocky ground. Although, to get good holding is possible but remember to use a long chain, at least 5 x the depth. Look out for heavy rolling at some places in the Bay.

We have learned that things break and this time it was the charge controller to our wind turbine, Aerogen-4. The controller could not handle a period of very strong winds during one of the nights at the anchor berth. We had 42 kn for a short while together with heavy rain. A number of yachts went drifting as well and we were happy not to be in their way. The day after we were involved in a rescue operation when a French Cat went drifting and would have disappeared into the Caribbean Sea if not a sailing friend from New Zealand and Peach had acted. Next evening we were offered a lovely gathering at the Cat with French snacks and good wine.

Back to the turbine, when the device is no longer manufactured and the charge controller cannot be found anywhere, we had to invest in a new one. The choice was an Air-X, Silent version. A lot of work installing the device. By the way, we also received a new electrical motor from Echo Marine for our water-maker which still did not work properly. The system has been up and running for a couple of hours and finally everything seems to be ok. We produce 65 L/hour which is good.

After a small hurricane, Beryl, has passed us, well far north of us, we will cast off for the ABC Islands, finally. Actually, Beryl has been reduced to a tropical storm as we speak. While the hurricane was moving towards the Islands we took a berth at Grenada Yacht Club which is a place we recommend. Now we are doing route planning and preparations.