Finally after 11 days it is time to leave Cape Verde. We have done a lot of maintenance and repair work.  The weather forecast for the coming week looks good and even better for the next week provided this can be trusted. Our plan is to arrive in Grenada at the end of this month. Again, will we spot a Blue Whale or is it still a dream only…

After leaving Cape Verde we went south to avoid a strong westerly wind normally increased by the Islands. Those of you who have read about our rudder problem prior to Cape Verde fully understand our wish for lighter winds. After 48 hour we turned west which was a good decision. The wind came from northeast with a speed of 22-25 kn for days. On the fifth day the wind decreased to about 16-19 kn why we had to set the whisker pole for the first time since leaving Puerto de Mogan. The set-up lead to nice sailing where we do not need to worry about our foresail.
Surprisingly several fishing boats turned up around us and because of their rather high speed we believe they were out catching big fish like Tuna and Blue Marlin perhaps?
The weather forecast downloaded from our SSB promise nice sailing conditions for at least 2-3 days.
By the way, no Blue whale yet but instead a number of flying fish and squids is thrown back to sea every morning after the standard, morning check is carried out. Today it was in all seven of them” 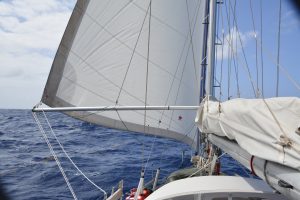 The whisker pole was a great help

Were better than expected. We had hoped for a perfect wind and actually got that. The wind speed stayed between 18-26 kn the whole journey which in total, from Cape Verde, took 16 days despite our southwesterly course the first two days. Pretty good! The wind was enough for the use of the genoa only with the help of the whisker pole.

Only minor problems during the way, a toilette hose got jammed which only took 5 hours to fix and a reduction valve for a gas bottle had to be replaced. And, actually on our way to Cape Verde the boost pump to our watermaker died why we did not have any possibility to produce water on our way over. We had enough water but needed to be cautious of course. Well on Grenada fixing the watermaker is highest priority. 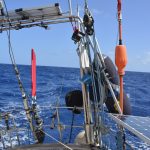 A beautiful day on the Atlantic ocean

No Blue whale or any other whale for that matter as far as we could see. We noted however that the ocean is full with flying fish. It was a pleasure to watch the fish emerge from the surface and sometimes glide an impressing distance. Maybe they were scared by Peach, hunted by a predator fish or simply they just took off for the fun of it. We believe the latter…

View the short movie from
The Atlantic Ocean

During our time out there we talked about the mental stress being alone in the middle of nowhere, and yes, there is such a stress. Not because there is a reason to be afraid but the uncertainty whether something bad will happen is there. A really bad change in the weather is very unlikely this time of the year and we trust Peach completely, still, well you know, one is lonely out there.

Anyway and finally, Grenada is emerging from the sea ahead of us and our first Atlantic crossing is a fact. Will be nice to moor in Prickly Bay for a couple of days.

We’ll be in touch