Our journey from Den Helder to Brighton started well. We left early in the morning on 17 July when it was still dark. The weather was fine but no wind why we used the engine. Passing Rotterdam was interesting with all the ships going into the Europort. We needed to find an opportunity to cross the ship lane without to much fuzz and it went well. We moved on during the night and as usual in these parts we had to struggle with the tide. Close to Dunkerque we had som rain and saw a fantastic rainbow. We had planned to enter the Dunkerque Marina but when the weather was still decent we decided to move on and we set course for Calais where we wanted to cross the Dover Straight. We did so without to much crossing traffic. No use going into Dover when we calculated to reach Brighton later that evening. Some may say this was a mistake when the distance to Brighton was 65 nm. Anyway, we went on and for once using the tide to our advantage. We had however not calculated with (nor did the forecast) a major increase in wind. Suddenly we were surfing the waves at more than 10 kn in a wind of around 30 kn.
We could not believe our eyes when we saw that our speed over ground was higher than the speed in the water after the tide had turned and worked against us. That powerfull was the tailwind which at the time reached 36 kn. It seems that we never get away from hard weather. The major low pressure area over central England had moved further south. Anyway, we entered the Brighton Marina in difficult wind an hour before a 4-5 hour storm with lightning and thunder came over us. It felt good to be safely moored. 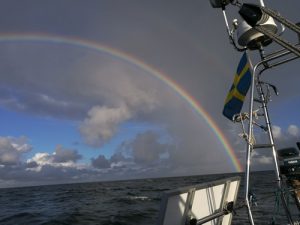